Do you have harmful Mould in your house? 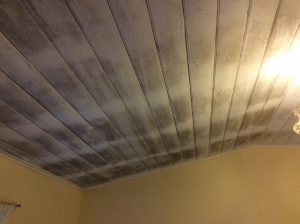 BEFORE and AFTER Photo of Mould on a Timber Ceiling

How do you know which moulds are dangerous to your families’ health?

How can you fix your mould problem without having to spend a small fortune?

Mould Removal is a dangerous job, operators have to wear protective clothing and masks to carry out the work, because like Asbestos some moulds can kill you if they get into your lungs, your eyes, nose or throat and when you disturb the mould to clean it, you activate the mould spores and they spread through the air.

But Don’t Worry, we’re here to help you!

Trying to find a Mould Removal product that is effective but still safe for you and your family can be difficult.

A lot of Mould Removal products on the market contain bleach, apart from the damage the bleach can do if it drips onto your carpet or furnishings, it doesn’t kill the mould, it just changes the colour (bleaches it) and that is why the mould returns.

Mould has become such a health problem that is being hailed as “The Asbestos of a New Generation” in the United States.

We use a safe but powerful  Mould Removal and Mould Prevention product which will in most cases stop the mould from coming back for up to 12 months.

(provided the source of the mould is found and fixed, our mould remover will stop it coming back for up to 12 months)

Great for drive-ways and garden walls and roof tiles. Do it once a year, save time, save water and your driveway and paths will look Fantastic for the next 12 months or more.

We do a thorough job of removing the mould inside your home, it is time consuming, but you can’t cut corners when dealing with deadly mould spores.

The mould spores are transported through the air and that’s why we have to extract and treat ALL carpets and soft furnishings in the area, EVERY hard surface has to be cleaned and wiped down with our specialty product to prevent the Mould from spreading.